Advice to a Young (or Old) Scholar: Reading Darwin, Part 1 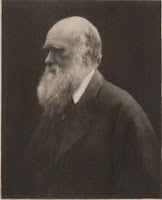 Now that I’ve made the challenge to actually read On the Origin of Species by the 24th November 2009 (the anniversary of the book’s First Edition), I want to offer some advice that will probably make your experience with this incredible work more enjoyable. If there’s a Cliff Notes (or something like and similar) for On the Origin of Species, I couldn’t find it back in ’76 when I was taking Dr. Greene’s seminar on Evolutionary Theory. Fortunately, there are many resources that will make your experience with this book more enjoyable and enlightening – you’ll be making something akin to your own Cliff Notes as you go. And while you don’t have to assemble a scale model of the Beagle or explore your backyard with a bug box, there are a number of ways that you can prepare your brain for experiencing this masterpiece of scientific elegance.

Whenever we read historical works – whether they’re scientific tomes or novels – learning something about the context is crucial to our understanding. It’s a point that’s often (and unfortunately), lost particularly by those who wish to play “gotcha” with the lives of scientists from times past. So, before you lose yourself in On the Origin of Species, find out more about the person and times of Charles Darwin. And he had a fascinating life indeed. As a boy, he was a passionate collector – of practically anything – and, as an adult at Down House, he cared for his children, juggled several books and projects at a time, and struggled with disabling chronic illnesses.

What we’re really after here is a contextual overview of Darwin’s life before delving into the specificity of his work. Scientific investigations aren’t acts of special creation. Darwin’s life and science were born out of the intellectual and social milieu of 19th century, and influenced by his predecessors, teachers and colleagues. What were the intellectual and scientific foundations for his work? Who influenced him, and how?

If all this sounds like you’ll need (minimally) a new set of Encyclopedia Britannica just to get started, you’ll be pleasantly surprised to learn that you won’t need anything beyond a computer with internet access. A great place to launch your study of Origin of Species is at Down House, itself, home to Charles and Emma Darwin and their children. It was here in his study where he wrote by the fire in his favorite chair and peered through his microscope at slides of stems and seeds. Fortunately, we can take a virtual tour of Down House with David Attenborough as our guide by exploring the estate’s website at http://www.english-heritage.org.uk/server/show/nav.20235 .


For learning about the person of Charles Darwin we have virtual access to his autobiography, a work that was edited and includes supplementary material by Francis Darwin, his son. http://darwin-online.org.uk/content/frameset?itemID=F1461&viewtype=text&pageseq=1The elder Darwin never intended to publish his autobiography – he wrote this rich collection of stories solely for his children and future generations. The work is a gift to all who want a better appreciation for his life and an excellent prelude to your explorations of Darwin’s scientific work.
Posted by MK "Doc" Sandford, Ph.D. at 12:02 AM

As if we needed anymore evidence...

MK "Doc" Sandford, Ph.D.
Why "Fieldnotes by Doc"? I am a physical (or biological) anthropologist by training. In 2006, I left university teaching and research due to a chronic autoimmune disease, psoriatic arthritis. I miss daily interaction with students and colleagues over pizza and beer, or in the classroom and in the lab. Today, I write, and some days that writing includes blogging. I enjoy photography, and having taken some photos to show, I write songs to perform on my guitar, I have long been involved in causes of social justice and politics. I do a little volunteer work when I can. I spend as much time as possible in nature and am privileged to be the steward of five forested acres. An anthropologist studies humankind - how human beings are alike and how we humans are different. That means that, in the words of one of my most important mentor's, "Everything is relevant if you are smart enough to see it." Drop in and you may find me talking about some new species of fossil, an old movie, or the latest political crisis. If it is of interest to you, spend some time here, send me a question, or make a comment.